'Crack Alley' is reborn
An intrepid builder from California is reviving a troubled neighborhood in DeLand. 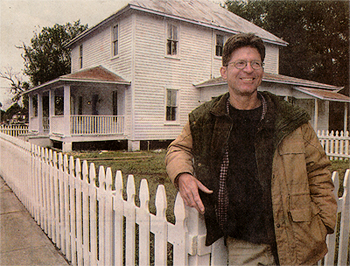 DELAND - A few years ago, Michael Arth was living on the bottom floor of a house in Hollywood, California, in a beautiful mansion he had designed and built just below those famous, towering letters on the hillside. The biggest nuisance was the sound of his tenant, Keanu Reeves, and Reeves' band playing loud music in the garage.

Arth rented his next house, a seven-level mountaintop villa, to the drummer from Guns N' Roses. The parties thrown in those days were good, Arth says.

Then Arth moved to Santa Barbara and met his wife, and his interests began to change. He turned his eye from designing beautiful homes to constructing neighborhoods, places where a family could be raised. He looked for a new risk and placed a bet in Volusia County.

In August, he moved into a rundown house in DeLand at the end of a street Arth refers to as "Crack Alley," a dark lane that was shrouded in overgrown plants and littered with tall piles of trash. Some of the buildings didn't meet city codes.

At night, Arth's disquiet would take the form of a dream in which people were coming to kill him for invading their neighborhood.

But he stayed and bought 18 other buildings in a fixer-upper project the likes of which DeLand officials say they have never seen.

Arth, 48, now calls the two-block area of homes "The Garden District." It straddles Voorhis Avenue between Alabama and Amelia avenues, a living laboratory for urban renewal.

Arth has worn many hats since he dropped out of college more than 25 years ago: artist, construction worker, landlord. He traveled the world exhibiting his paintings, and he then built mansions that were homes to celebrities.

Now, he plans to remake a section of bedraggled old buildings into mixed-income housing.

Painted in bright blues, yellows and oranges - a mix suggested by his wife - and lined with white picket fences, Arth's homes stand out in the neighborhood. It's a dash of Disney's Celebration in a place the city had been considering for demolition.

Arth and his workers have installed heating and electricity, repaired plumbing, and restored original wood floors and bathrooms.

Along with the 27 residential units, Arth also has a building set aside for a business office and plans to open a museum and an art gallery dedicated to the neighborhood's history. Arth has yellowed photos of the neighborhood at the turn of the century - an era when he says the neighborhood was home to Stetson professors and police officers. He expects much of the construction to be completed by late spring.

The price of renovation is low by California standards. For the cost of renovating a home in Santa Barbara, California, Arth could take on a grander project with greater impact, he realized. He found DeLand through the Internet, and it met all the specifications for his experiment: historic downtown, a short drive from the ocean and close to a major airport. He scouted a similar neighborhood on Chicago's South Side, but that, Arth says, wouldn't have been able to make a difference like he could in Florida.

"In Chicago, I would have been swallowed up," Arth said.

Arth and family still live in the house that gave him nightmares six months ago. His wife, Maya, whom he put on a plane back to her parents' home in Bulgaria in the early going, lives with him again, along with their 2-month old daughter. Maya gave birth to Sophia in their new home in December, making Sophia the family's only DeLand native.

Inside, Arth's house has the look of one belonging to a hip urban couple. Bright colors. Dark wood. Vintage 1950's retro furniture that's all right angles. Arth and his wife laugh when he opens a photo album and shows where the piles of garbage used to collect in the house, or when he points out where he found a crack pipe when they were remodeling.

Other stories aren't so funny. In the course of fixing up the homes, Arth heard rumors that a local gang was going to burn down the neighborhood in revenge. A vandal broke three windows in Arth's homes. One night, a worker running an errand was sliced across the cheek from ear to mouth, leaving a wide scar.

These incidents haven't dampened Arth's interest in the project. So far, he has seven tenants, and 20 more units are being renovated. Arth said the total cost for the project - both acquisition and construction - was little more than $1 million. He said he picked up some of the houses for no more than back taxes. Now they rent out for $350 to $850 per month. 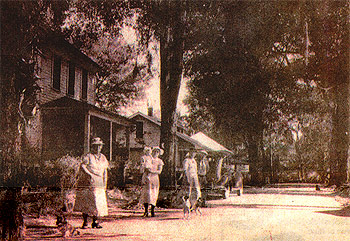 Old Times. Residents of South Hayden Avenue enjoy the sunshine in this photo from 1937, when the neighborhood was in its heyday.

Some prospective tenants were excited enough about the project that they took it over from him. Ted and Danielle Peele responded to Arth's small classified ad and negotiated to take over the home's renovation. Danielle's father, Al Margro, is a construction worker who was happy to help, but he admitted that his first sight of the home shook his confidence.

"I thought, 'Oh my God, what am I getting myself into?'" Margro said.

But Margro said he was never that scared. Last week, he was restoring a bathtub and installing windows. The family hopes to move into the home in the next few weeks.

Start-up money for the development came from private investors, most from the DeLand area. Arth said neighbors have committed to fixing up their houses, and some people have even shown interest in buying the neighboring homes to do just what Arth is doing.

Arth even bought a house on an adjacent block to prod some of his neighbors into cleaning up their homes. He hopes putting a nice home on the street will plant a seed.

People who know Arth said his project wasn't a tough sell. Christie Beyer, a friend and investor from California, said she always has been impressed at how well Arth follows through on his ideas.

"He always says he's going to do some outlandish thing, and nobody believes him, but then he does it," Beyer said.

Locals are excited by the changes in the neighborhood. George Rivera has lived on Voorhis Avenue for five years in a home that is now one of Arth's apartments. In the worst times, Rivera recalls, strangers played dice on his doorstep in the middle of the day. He used to secure the windows of the home with sticks and hang up drapes so no one could see inside.

Today, he is starting to leave some of his windows open during the day, but it's not easy.

"It used to be like a vampire's lair," Rivera said. "It's tough to get used to things now when you were so used to living in a hole."

Rivera has watched the gangs that used to loiter near his home move one block over, then another. Now, he said, he doesn't see them around at all.

DeLand Police Cmdr. Randel Henderson, who calls Arth a visionary, confirmed that crime in the area has decreased since Arth began his project. Henderson described his work with Arth as a one-two punch: Arth cleaned up the neighborhood, and police cleaned up the crime.

Less crime isn't Arth's only effect. Assistant City Manager Michael Pleus said Arth's project has attracted the attention of City Hall. The city has a long-term goal to turn Alabama Avenue into a stretch of green space that would run from Earl Brown Park to Stetson University, right along the new courthouse and Arth's neighborhood. The project doesn't have any financing now, but Arth's project could spur it on, Pleus said.

Arth says the only criticism he has received so far has come from the area's displaced drug dealers, and even that has quieted down recently. He said residents appreciate his effort.

"People have said, 'If this is how people in California are, bring some more with you,'" Arth said.