By Rick Tonyan - SPECIAL TO THE BEACON 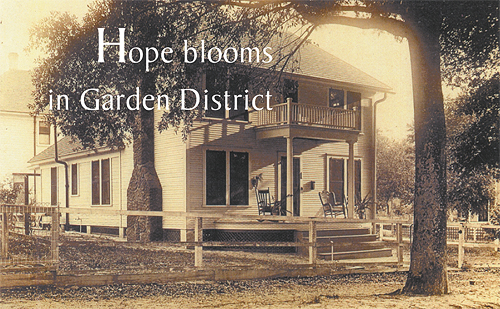 Looking back: Alice Bates Wyatt’s father, Glen, a carpenter, built this house at 216 E. Voorhis Ave. for
his family in 1911. At that time, the neighborhood was filled with such comfortable middle-class homes.
The neighborhood steadily declined, eventually becoming known as “Crack Alley.” One man had something
different in mind. The photo above helped provide inspiration for Michael Arth’s
vision of DeLand’s Garden District.

Alice Bates Wyatt watched in horror as the DeLand neighborhood she grew up in turned into a crime-ridden slum called “Crack Alley.”

Now, she’s watching with pride and satisfaction as the neighborhood around her former home at 216 E. Voorhis Ave. comes back from dilapidation. 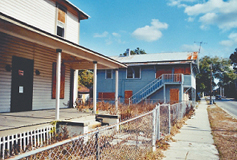 Urban blight: The two homes above show the conditions of the East Voorhis Avenue area around Wyatt’s former home before Arth moved in to begin the renovations.

The East Voorhis house was Wyatt’s home for most of her life since her father, Glen Bates, built it in 1911. At that time, the neighborhood was filled with single-family homes belonging to middle- and upper-middle-class residents.

“We had wonderful neighbors in the early days,” Wyatt, now 91, said. “You never worried about locking your doors. We’d go North for the summer and not worry about the house while we were gone.”

All that began to change in the 1960s. The single-family homes were converted to apartments and duplexes. By the time Wyatt, a retired schoolteacher, left for another DeLand neighborhood in 1978, crime was rampant.

“It became so terribly dangerous,” she said. “It was heartbreaking.” 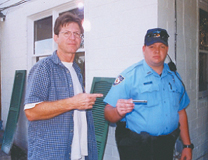 Why the neighborhood was called ‘Crack Alley’: Arth, left, turns a crack pipe, used for smoking crack cocaine, over to a police officer. Arth found the pipe in a Hayden Avenue building that was renovated into a home for him, his wife, Maya, and 2-month-old daughter Sophia Evelyn.

Ten years ago, the neighborhood acquired the nickname “Crack Alley” because of the amount of drug-dealing in the area. Then, in 2000, a California artist and contractor named Michael Arth bought 27 buildings, including Wyatt’s old home, in the neighborhood.

Arth is trying to put into practice some of his ideas on urban planning and neighborhood redevelopment. Buildings that had been scheduled for demolition by the city have been rehabilitated and renovated by Arth. Former crack houses have returned to Victorian-style, single-family homes.

He dubbed the project the “DeLand Garden District” and has dreams of eventually creating a neighborhood complete with trendy restaurants and a fishpond with an artificial waterfall.
Wyatt has been cheering Arth on.

“I think it’s wonderful,” she said. “It’s so heartwarming to see what’s being done there now.” 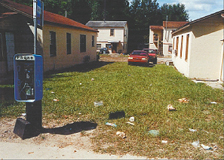 ‘Crack Alley’: The cluster of East Voorhis Avenue buildings above are some of seven that — until recently — were havens for drug dealers and prostitutes. The pay phone in the foreground was used by dealers to arrange drug sales.

And, unbeknownst to her, Wyatt has been an inspiration for the contractor. When she was 5 years old, she was playing with an Easter card she had been sent. She stuck it in a crack in a baseboard of an upstairs closet, and it fell down behind the walls of another closet on the first floor.

There it remained until Arth found it while remodeling the downstairs closet. The card reminded him of what kind of neighborhood “Crack Alley” once had been. And it gave him hope he could turn it back into what Wyatt remembers from her childhood.

“I was just 5 years old. I think I was playing and just lost the Easter card,” Wyatt said. “Now it’s turned up. I’m glad he (Arth) found it. It’s funny how these things turn out.” 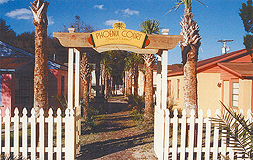 Phoenix Court: Above is the same cluster of buildings after developer Michael Arth
began his rehabilitation project. He named this area Phoenix Court after the mythical bird
that is reborn from its own ashes after it spontaneously combusts. Also, the little
street now is lined with Phoenix palm trees. 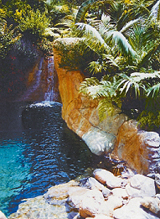 Vision for a thriving future: Arth created this artificial
waterfall for a fountain in Southern California.
He envisions putting one like it in the middle of Phoenix Court.