A Man's Passion, A City's Pride 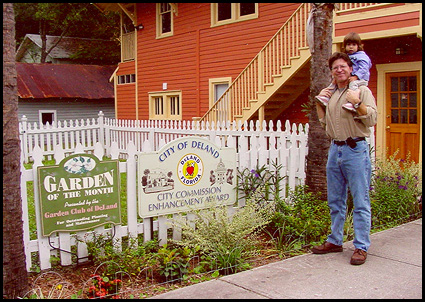 Michael E. Arth and daughter Sophia in front of his art gallery and museum.

Homes painted in vivid colors are framed with white picket fences that unify the Garden District, returning it to its original charm. Flowers and more than one hundred palm trees planted by Arth further enhance this ongoing project. Originally built in 1903, "The Art of the Garden Gallery" located at 205 E. Voorhis Avenue features Arth's creative etchings, prints, paintings and photographs. The adjacent, still developing Garden District Museum houses artifacts and historical photos of this turn-of-the-century neighborhood. Arth's successes have inspired others to buy into the area. The Garden District is a wonderful gift to DeLand and residents are encouraged to visit this quaint community located within walking distance from downtown."

Boothe said, "Bounded by Howry Avenue on the north, Euclid Avenue on the south, Amelia Avenue on the east, and Woodland Blvd. On the west, the Garden District is a hundred-year-old neighborhood that from 1970 to 2001 had fallen to vagrants, prostitutes and drug dealers. Promoting a redevelopment plan for southern DeLand three years ago, local real estate broker and preservationist, Maggi Hall, brokered the sale of a number of condemned buildings to Arth, whose impressive credentials include an art career as well as the designing, building and rebuilding of houses, gardens, new towns and neighborhoods. After a move to DeLand from Santa Barbara, California, Arth proceeded to renovate 28 homes, comprised of 14 single-family houses, five duplexes and one apartment complex. He resides in the Garden District with wife Maya and daughter Sophia. Honors bestowed upon him include: The City of DeLand and Volusia County, proclaiming November 12, 2002 as "Michael Arth Day," The Pilot Club's "Making a Difference Award," and the "City Commission Enhancement Award", recently presented by Mayor Robert Apgar.