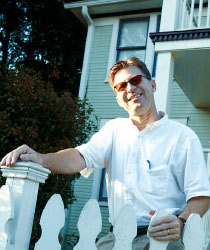 Michael Arth has helped give a new lease on life to a once-decaying part of DeLand now known as the Garden District.

Hercules, the mythical Greek god, is known for having overcome incredible challenges in the face of danger and evil. But despite his courage, wisdom and resolve, it is not clear whether Hercules could have done what DeLand resident Michael Arth has done in transforming a crack haven into one of DeLand's most unique neighborhoods.

Today, what has become known as The Garden District, only recently was an urban jungle festering with drug traffic and crime. How did this metamorphosis happen? What compelled Arth to take up residence in an urban hellhole, armed only with vision and determination? The reference to Hercules is not hype. What Arth has accomplished is Herculean in every sense of the word.

Michael Arth has helped give a new lease on life to a once-decaying part of DeLand now known as the Garden District.

In 2001, Arth was a homebuilder in Santa Barbara, California. But unlike a typical homebuilder, he has a fine arts background. He is an author. He is a longtime student of city planning. He is a proponent of the New Urbanism and founder of the New Pedestrianism, movements that seek to correct many of the design flaws inherent in American cities and towns.

Arth was in the throes of writing a book titled "The Labors of Hercules: Modern Solutions to 12 Herculean Problems," so he is intimately familiar with the revered god's batting average against all odds. He is equally familiar with the complex problems of contemporary society. Among the chapters in his book are narratives on urbanism, transportation and drugs, each posing great challenges to city governments and the residents they serve.

His passion for the elusive sense of community lacking in most communities took Arth on a "field trip" to see places that have invested in planning and design to avoid or mitigate these and other problems. These communities were created or restored under the influence of the New Urbanism and Smart Growth movements. What he saw in Celebration, Charleston, Beaufort, Savannah and Seaside moved him profoundly. He began thinking about creating a neighborhood that would emulate the communities he studied and visited.

In the course of his studies, Arth came across an online real estate listing by Maggi Hall, a DeLand real estate agent and preservationist. She invited Arth to purchase some core buildings in an area whose character and sense of community had given way to decay and crime. The houses in the area date to the period between 1906 and World War II. She had hoped he would take an interest in the area and generate discussions about what to do with the neighborhood which, by all accounts, had hit rock bottom.

Arth visited DeLand and saw a neighborhood that had multiple nicknames including Cracktown, Crack Alley, The Bottom, Hell, The End and others. The two-block area had a number of crack houses. Even the neighborhood convenience store was a crack house where dealers and users met, bought and sold drugs and paraphernalia.

"It was horrifying to see and chilling to realize that this slice of hell flourished just a couple blocks away from government and shopping areas and city neighborhoods populated by families," said Arth. "It seemed obvious the cancer not only was malignant, but also surely would spread, consuming more and more of this charming old Florida rural city."

Arth saw something beyond the danger and horror that defined the neighborhood. He could see interesting architecture beneath the neglect and decay. He could see a city neighborhood whose basic layout could be restored and modified as a catalyst to comfort, safety and security, eliminating the fear, danger and paranoia that prevailed. But it couldn't be done simply by restoring a couple of houses. It would require seizing the entire neighborhood and giving new life to dozens of buildings, moving junkies, drug traffickers and criminals out, and convincing families and professionals to move in. It was a huge challenge - a Herculean challenge.

How did he begin? He identified two buildings on E. Voorhis Avenue that were condemned flop houses. The city advised him that back taxes of $16,000 were owed on the buildings as was $302,000 in building code violation fines. The houses were scheduled for demolition, but City Manager Mike Abels told Arth that for $950 the city would board up the houses, delay demolition and give him six months to purchase the buildings. Arth took the deal.

Arth and his wife, Maya, sold their California home (at a loss), and drove across the nation, a nine-day journey punctuated by six breakdowns. The day after they arrived, he sent Maya, who was pregnant with their first child, to live in her native Bulgaria for two months while he got situated. On the last day of the city's six-month extension on the two houses Arth wanted to buy, he cobbled together $16,000 and bought them for back taxes. The city forgave the building code violations. He then began work on the houses, while sizing up the entire neighborhood, walking the streets and inviting drug addicts and dealers to leave. They did.

The neighborhood convenience store re-emerged as a bona fide convenience store with security cameras, a no loitering policy and a police edict assuring the store would be run henceforth as a legitimate business.

The exhaustive work began on the two homes Arth purchased. During this time, Arth lived in another decaying house. The owner simply flipped him the keys. No heat. No air. No class. But no rent either. Arth later bought the house and restored it.

Today the structure is home to the Arth family, including Sophie, 18 months. Just a few steps across the street is Arth's office.

Over the past two years, Arth has purchased 19 structures representing some 28 homes including houses, duplexes and one four-unit apartment building. He has relied on private lenders for mortgages. Banks weren't interested.

By now, others have purchased buildings, including Maggi Hall, who bought several houses that anchor the southwest corner of The Garden District. Attorney Lisa Starke has purchased land and plans to build an office that will fit in nicely with the neighborhood restoration. A couple is considering opening a gourmet store and restaurant in the neighborhood. There soon will be a neighborhood newspaper, the Garden District Gazette, that will be edited by Ramona Whaley, who also manages The Art in the Garden Gallery, which exhibits Arth's artwork and photography.

The drug addicts and dealers have vacated and respectable tenants have moved in. Among them are some semi-retired people, young families, single professional women, a journalist and a photographer.

The initial work is centered in the core area of the Garden District, near S. Amelia and E. Voorhis avenues. As more people respond to the concept of a "garden district," restorations will reach from S. Amelia and S. Alabama avenues and from E. Howry and E. Euclid avenues.

In addition to the physical changes in the neighborhood, there is a genuine neighborly aura. As Arth walks through the neighborhood, narrating its evolution along the way and pausing here and there to pick up litter, he is greeted warmly by residents, each of whom knows him by name - a testimony to his accomplishment and the notion that one man can make a difference.