Pedestrian Villages are the antidote to sprawl

Recently, there were discussions among various DeLand interests, the local planning department, and me, regarding Mill Springs, an 80-acre pedestrian oriented housing project that was being developed as an antidote to sprawl. The primary financier was to be local developer and former state legislator Dick McMahan, who, along with his wife, Dinky, is known for community activism and philanthropy. McMahan is also the white knight who rode in with SouthTrust Bank to help refinance much of downtown DeLand's Garden District redevelopment project.

Mill Springs was a proposed Pedestrian Village(TM) that exemplifies, what I call, the New Pedestrianism, a branch of New Urbanism, and it would have been the first subdivision of its kind in the world. The walkable neighborhood, consisting of 368 houses facing car-free pedestrian lanes, was to have been built on West Minnesota Avenue, just west of State Road 15A. Alas, Mill Springs is a neighborhood that almost was but will never be. The landowners in Mill Springs withdrew their land from the project, and this site is no longer available. Meanwhile, the search is on for another site to showcase the same concept. Today, McMahan and others are now searching for other locations in the DeLand Area for a Pedestrian Village.

What is a Pedestrian Village and why do we need them? To state it plainly, American cities are ugly and spread out. A listing of our urban problems and what we can do to prevent further decline is somewhat complicated but not obtuse. The most politically charged issue is land-use regulation, which should not be based primarily on short-term individual interests, as it is now, but rather on regulation that will nurture the long-term common good. We must have a national land use and zoning policy, with guidelines that support sustainable developments even if it involves a constitutional amendment.

It should be the right of Americans to enjoy America the beautiful. This means building pedestrian and bike trails that are wholly separate from highways and roads. This means controlling the placement and landscaping of parking. This means burying new power lines, and systematically burying existing overhead power and lines wherever it is feasible to do so. Billboards, basically composed of litter hoisted on sticks and stuck in the face of an unwilling public, should be banned. Like fax machine ads, telemarketing, and spam, billboards are forced upon citizens against their will, and therefore it is dubious to label such advertising as an expression of free speech. Citizens can always vote to allow advertising in certain areas, like Times Square or Sunset Boulevard, but otherwise billboards and invasive advertising are as welcome as chewing gum stuck on the sole of a shoe. 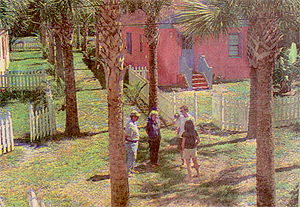 Another very important determinant in the degradation of our cities and surrounding countryside is the automobile. Americans spend twice as much of their gross domestic product as Europeans do for transportation, but the hidden cost to society is immeasurable. In the U.S. alone, 27 million motor vehicles are crashed every year, resulting in 42,000 deaths and five million injuries.

During the past 20 years, town planners and urban designers have been studying these problems and trying to come up with ways to make our cities livable. "New Urbanism" and "Smart Growth" are two of the best-known labels for new ideas that are basically a return to some of the old ways of doing things. There is a renewed interest in preserving significant buildings or neighborhoods from the past. Many new buildings and homes are being constructed in more traditional styles, or at least with more attention to design. Narrower streets calm traffic in residential areas while space on the side is provided for trees, sidewalks, and bike lanes. Many new developments are built with greater density so that amenities can be provided within walking or biking distance. Alleyways are being added so that garages, utilities, and garbage collection can be better concealed. Parking lots are being landscaped and hidden behind buildings. Public transportation is being improved. Natural features are being preserved or augmented so that they can be enjoyed. New towns in Florida, such as Seaside, Rosemary Beach, and Celebration are being built that reflect these new principles.

The Mill Springs Pedestrian Village was to be named after a 1920's sawmill on the site that would have been renovated and used as the neighborhood meeting-hall. A look at the street plan, and also at the detail sheets shows typical suburban houses alongside New Urbanism and New Pedestrianism concepts. The most unusual feature at Mill Springs is the use of pedestrian lanes (colored light green on the Mill Springs plan). The automobile street, which is always in front, has been moved to the rear, along with the garages. It is not an alley, but a full-sized street with trees. Pedestrian lanes in front of the homes, lined with formal trees, are at least 12 feet wide to accommodate both bicycles and pedestrians. The lanes are also wide enough to serve as impromptu meeting places, forecourts for street parties, or safe playgrounds for children. Traditional style homes, complete with deep porches, face the car-free lanes. At Mill Springs the dramatic radial plan focuses attention on the village center and the water features, but a grid pattern would also have worked. This is how a visitor would experience it:

The western end of the restored old mill has a large window that frames a pedestrian promenade, shaded by a cathedral-like vault of trees, that in turn frames a prominent building at the end. On either side of the promenade are bungalow-style traditional homes with spacious porches, typical of the 1920s. These porches are as important for the way they look as they are for sitting. Most of the year, the climate in Central Florida is hospitable to sitting outside, but even in the heat of summer, many people enjoy watching thunderstorms from the safety of a porch. There are no motor vehicles, garages, traffic, or parked cars to be seen anywhere because the garages are in the rear and are serviced by a street where an alley might have been. No power lines are visible because utilities are buried beside the rear streets.

At the end of the promenade is the village center, consisting of a large building with grand porches on both sides where residents and visitors relax or dine while taking in the views. The building provides various amenities, including post office boxes, card room, gym, swimming pool dressing rooms, general store, café and restaurant, all within tree-shaded walking distance from the homes. On the other side of this building, the porch overlooks a garden and a natural style pool that flows over a cliff into a swimming pool below. The circular pool has a walkway around it. From under the walkway waterfalls spill into a small body of water named Sky Pond that represents the circle of the sky that is reflected in its surface. From the village center, or anywhere around Sky Pond, no vehicles can b seen, because every home around the pond faces the view and not the automobile street. It is not only the homes on the main promenade or pond that have these rear streets, but virtually all the homes in Mill Springs are on pedestrian lanes. These linear parks connect all the homes to each other and to the village center. Some of the pedestrian lanes have landscaped strips or forest on either side, especially where large trees must be preserved. Motor vehicles are equally provided for on attractive tree-lined streets that service the homes from the rear. Trashcans are accessed directly from their enclosures and never seen on the street. Rear-loading garages back up to the kitchen or pantry area, or are connected with breezeways to the kitchen area. Every house has a fenced garden with a garden gate at the rear where visitors arriving by automobile may call. There is also the option available to create a carriage house by putting an apartment over the garage. The entire development is built to encourage walking and biking, and reduce automobile usage. The average suburban household generates 12 automobile trips per day. At Mill Springs, this figure is cut dramatically as residents would feel comfortable moving about on pleasant, shaded lanes for dining out, recreation, visiting neighbors, or just taking a walk or bike ride. The charm of traditional homes with deep porches on shady pedestrian lanes, ample green space, water features, and other amenities are provided at prices only 5 percent - 10 percent higher than ordinary tract houses, with the prices of most homes beginning at the median price of existing new home sales. 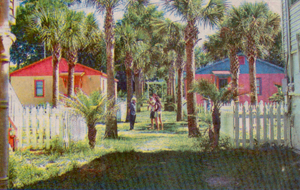 Pedestrian lanes, like the one at Phoenix Court in DeLand's Garden District, are a new way to add beauty to a development. The lanes allow the fronts of the houses to face each other and the grassy lanes, instead of roads and garages.

Even though Mill Springs will not be built, there are a number of other potential sites around DeLand whre Pedestrian Villages could be built. THere are also some local examples of how they would look. I am the primary redeveloper of downtown DeLand's Garden District, just one to two blocks south of the county courthouse on Alabama. Before languishing two decades as a trashfilled slum, filled with crumbling and boarded-up buildings, this was a traditional family neighborhood with interesting craftsman bungalows, cracker-style, and vernacular-style homes that was adjacent to the boulevard. Hre, I have created or augmented severl pedestrian-friendly features. At Phoenix Court, parking and a trash dumpster were removed from the center of the forecourt, and pedestrian lanes lined with palm trees were installed in its place. Eventually a water fountain and octagonal flower garden with enches will grace the intersection of the two lanes. On South Dayden Avenue, where I live with my wife and young daughter, the narrow, short, dead-end street we restored gives the feeling of what a pedestrian lane would be like. Here, traditional architecture, front porches, picket fences, trees, and the beginnings of a tree canopy give the same cozy, homey feel that a Pedestrian Village would have. On East Voorhis Avenue, the city paid for a line of mature cabbage palms that nowprotect the sidealk from the street.

Other issues in the Garden District related to pedestrians have become friction point. For over a year, I have also been trying to convince traffic engineers to put a four-way stop at the rather dangerous intersection of South Alabama and East Voorhis Avenue. It is important to calm the traffic on East Voorhis and make it safer for people crossing on foot from one part of the neighborhood to the other. This would enhance the livability of the neighborhood and help protect both pedestrians and motorists. Unfortunately, there has been resistance by the powers-that-be to do anything that would slow traffic - even though traffic comes to a dead halt at long traffic lights one block in either direction. In fact, the initial response of certain automobile-oriented traffic engineers was to ask me to rip out most of the palm trees and move the picket fences. Another effort has been to convince the City to make the planned DeLand Greenway (now Alabama Avenue) a true greenway, with a bike lane protected by a tree-lined center median strip. This green, shady corridor, paralleling Woodland, could be good start toward making DeLand bike-and pedestrian-friendly. A painted strip down one side a of a typical street with the words "bike lane" painted on the asphalt is neither safe nor aesthetic.

Properly done pedestrian and bicycle-related amenities, even where retrofitted into existing developments, return immeasurable benefits to urban areas in terms of health, aesthetics, ecology, and traffic reduction. If all new housing developments were built as Pedestrian Villages, with thoughtful consideration of how the town merges with the countryside, the word "development" would cease to be an obscenity.