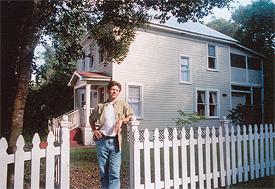 Maggi Hall turned off East Voorhis Avenue onto a side street and crept past ramshackle homes with dirt yards.

The neighborhood southeast of downtown DeLand looked like a graveyard for long-dead dreams. But Hall, a real estate agent who says making money is secondary to preserving old homes and restoring a once-vibrant neighborhood, has big dreams for these streets -- the kind of dreams that make the best communities.

"The dream is to restore this to the way, or close to the way, it looked in the '30s and '40s, with tree-lined streets," said Hall, a Stetson University graduate who returned to DeLand in 1999.

Already, the change is visible in the area that straddles East Voorhis.

Many of the pre-World War II wood houses, including some that the city had earmarked for demolition, now are renovated, brightly painted, and encircled by white picket fences. Gone are the unkempt yards and trash piles that once littered the neighborhood. Gone are the drug dealers and the prostitutes.

After learning about the city's plans to convert Alabama Avenue into a pedestrian greenway from Stetson University south to Earl Brown Park, Hall launched a private urban renewal project. She quickly found owners willing to sell properties along East Voorhis and other streets, such as Osceola and Hayden avenues and Brinkley Drive. She listed the properties and advertised for investors on an Internet Web site. Since June 2000, she has listed and sold about 50 properties to eight investors.

Hall found gold when Michael Arth, a dreamer and doer from Santa Barbara, California, answered her Internet ad. Since moving to DeLand last August, Arth has bought more than 20 single-family and multi-family homes in the neighborhood he calls the "Garden District."

Like Hall, he has big dreams, including converting an old mom-and-pop grocery into an old art gallery to exhibit his own work. Arth moved into a former "crack house" and quickly negotiated with the city to halt the demolition of two houses, including the old grocery.

"They gave me six months to save them or buy them. On the very day, six months later, I bought them," said Arth, who expects to spend $1.1 million to buy and restore his buildings. He figures he has completed 80 percent of the project and is looking for more financing to finish it.

Hall and Arth have made a believer out of City Manager Mike Abels, who doubted the wisdom of trying to restore houses that seemed suited only for demolition.

"I thought there was no way to save some of those houses. I was absolutely dead wrong," Abels said. "It's one of the most absolute, perfect examples of private individuals using private money to further a public purpose."

Hall already has extended the project south to Euclid Avenue, where she bought a cluster of houses that she will convert into a real estate office and veterinary complex for her daughter. Also, she expects to expand her real estate listings west of Woodland Boulevard into the Spring Hill area.

The private redevelopment meshes well with the city's long range plans. The city, for example, owns property near Euclid and Woodland and is awaiting state and federal money to build a transportation complex there that could accommodate Votran buses, local taxis and even a shuttle to the train station.

Hall said the neighborhood will remain culturally and ethnically diverse. "It's not a matter of displacing people. It's a matter of cleaning up what has become a ghetto," she said. "It's an extension of what the city has done in the way of restoration."