An Artist’s Quest Through the Past and Future 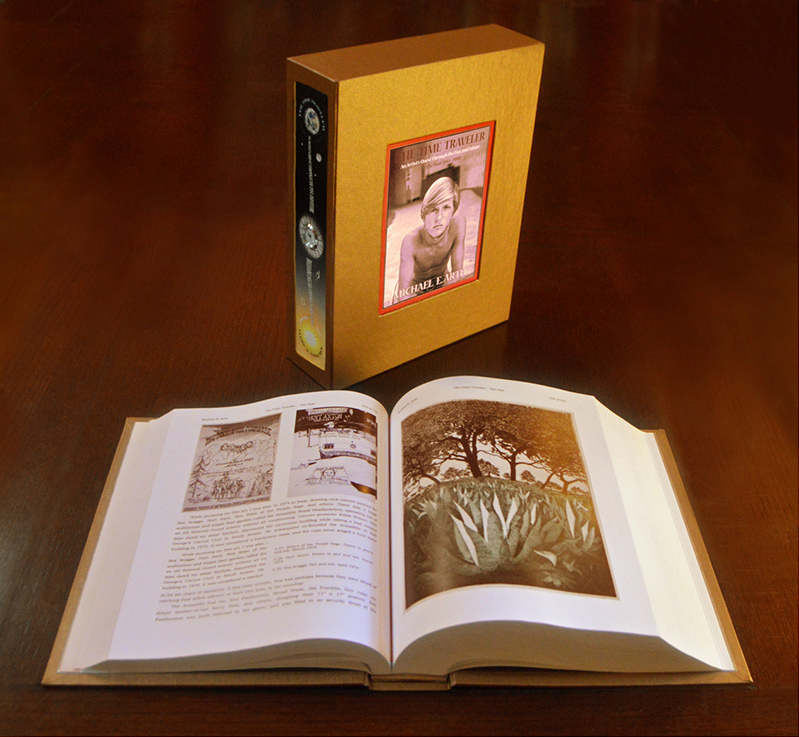 The Time Traveler is an 850-page flip book by polymath Michael E. Arth. From one side of the book can be read Arth’s memoir up to age 65. Flip the book over, and from the other side can be read his “memoir of the future,” where he looks back on the next 35 years as if written in 2053, when he is 100 years old.

The concept of combining a regression with a progression was inspired by a memoir and a fictional manuscript the artist wrote in 1980 while living in Paris. Years later, Arth rediscovered the two manuscripts back-to-back in a manila envelope, deep inside a battered old trunk that had been in storage. He was astonished to find that nearly two dozen elements of the unfinished, fictional book about a character, much like himself, had not only come true in his own life, but included hair-raising synchronicities connecting other major life events. Arth’s experiences, as meticulously documented in this book, call into question the linearity of time and beg for a scientific explanation that doesn’t involve mere chance. The artist’s quest through the past, present, and future, to find knowledge, adventure, love, and justice, begins on the personal level and progresses to include all of us. Join Arth’s quest through the mysteries of life to gain a little more clarity of where we came from and where we will all be going.

The book raises many questions while answering others. How can Arth rise from obscurity to become president of the United States in 2020? What are the forces stirring in the middle of one of the darkest periods in recent history that makes him believe America will be transformed by what he calls “The New Progressive Era,” which will bring our government from 21st place (tied with Italy as a “flawed democracy”) to the world’s leading constitutional democracy by 2024? For all of its curious stories and speculation about the nature of the universe, The Time Traveler takes nothing on faith. Rather it is a blueprint for the future based on combining evidence with wisdom to nurture an equitable, sustainable world that benefits everyone.

This boxed edition—available soon—is limited to only 300 copies, and each book, as shown above, will contain a chapter illustrated with an original drawing by the artist.

Please email TheTimeTraveler@goldenapplesmedia.com to get on the waiting list. We will then contact you later regarding the pre-publication price when it becomes available. Eventually, there will also be a general release edition of the book in print and digital formats.

Read the introduction and the first chapter of THE PAST.
Read Chapter 13.
Read Chapter 49 - Millionaire for a Day.
Read an outline of Arth’s other forthcoming book, The Labors of Hercules: Modern Solutions to 12 Herculean Problems.